Running a business with your partner 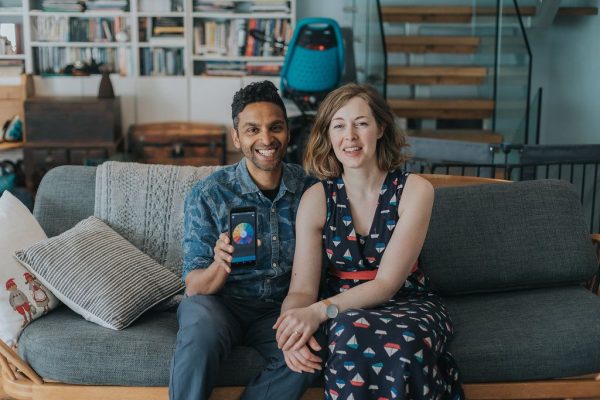 I grew up in a family where my parents ran a company together, and so I had some insight into running a family business. My parents ran a tool hire and sales business together until they sold it a decade ago. Various other members of my family also ran businesses with their partners, and so I’ve always felt comfortable with the idea of doing something similar with Rohan.

In 2011, I first came in on the sidelines of buddhify because I said I’d do the voice recordings for free because Rohan didn’t have any budget. In 2014, I joined the Mindfulness Everywhere team part-time alongside studying for a MSc in Psychology. Rohan jokes that I just turned up, but I had a background in running projects in mental health services and other public services, which we thought would be useful to plans we had for the business. One of the first things I worked on was developing Sleepfulness one of our other apps. In 2016, I became a co-director.

Today, I currently lead on research and business operations for buddhify. As it’s a small business, I do a little bit of everything — from customer service and partnership development to HR and finances. It’s really a mixed bag. I’m still a regular voice in the app and that’s perhaps what I am best known for on the user-facing side of things.

That and also that I’m Rohan’s wife.

What I’ve learnt about running a company with my partner

We’ve found that there’s a lot of curiosity about our being a husband and wife team  — both from people who are just interested in what it’s like behind-the-scenes and from other couples thinking of running a business together. So I’ve put together some highlights that give a candid look at what I’ve learnt from our journey thus far. Here’s what to be aware of when running a business with your partner.

You and your partner can be different people at work

I’m not suggesting that it was like Jekyll and Hyde between the office and home, more that different sides of our characters were expressed in a professional context that I wasn’t anticipating. Since as partners you know each other so well, you’d think finding your rhythm in the workplace together would be natural, but just like with other colleagues, you have to learn their way of doing things in this specific role and setting.

Overall, I’d say working with your partner is quite a different way of interacting than usual. Typically when you’re in a workplace, most people’s experience of you is as a work colleague and sometimes later as a friend. Whereas when you’re working with a partner, you have to balance being a work colleague with their experience of you outside of the office.

Expect a learning curve about yourself and your interactions

I actually found it strange at first when I joined Mindfulness Everywhere, as if I was being unnatural, in a way I hadn’t felt in other roles. For example, early on I found my usual way of being quite open about giving my thoughts and feedback on a project or way of working wasn’t welcomed and I started holding back. I realised that me giving feedback seemed like I was criticising something which Rohan had worked so hard on – it wasn’t intended that way – but it was something that had to be navigated.

It didn’t start out perfectly, but we’ve resolved this now. As time progressed (and possibly with a baby in the mix along the way), we’d discussed these experiences of our interactions to find a way that works for us. I wasn’t going to stop having thoughts and feedback, so we had to find a way to make this ok. Rohan likes to say he got over himself, but I certainly became more aware of certain boundaries, and the team got bigger which meant there was also just more discussion about everything Mindfulness Everywhere.

Unexpectedly, running a business can be less stressful

I don’t know the last time I felt the need to blow off steam about work. Yes, running a business has stress associated with it: decisions to make, knowing your family’s livelihood is dependent on the success of the business, and never really being able to step away for a decent break, but ultimately it’s never the tear your hair out and need to vent kind of stress. This was surprising to me. I really think it comes from the sense of shared responsibility with your partner — you are both in it together. With that in mind you, we can run the business how we want to run a business and consequently we have a lot of control over our work life.

So if you’re out there and thinking of setting up a business with your partner, or one of you already has a business and plan to bring them in… here are four things worth reflecting on…

Your own career is still important

Your personal development as part of your overall career is still important. We plan and try to make sure that at least some parts of the work we do as individuals serves our bigger ambition for our careers. In a small business, especially, it is easy to get caught up only doing the things that need to get done, like compliance. However over time this can lead to frustration, so it’s good to ensure you have your own career goals met through your work as well as the goals for the business.

Rohan and I have learnt over time our boundaries for work, and this is most apparent for when we do and don’t want to talk about work. I often use to burst out with something work related to Rohan, and actually that wasn’t fair of me if we were out for a nice hike or over dinner. So now I put it in an email or in a Slack message which we can pick up when we are both working.

Find what works for you as a couple, you might both be open all hours for work, but if you are not, work out those boundaries and stick to them.

Appreciate the flexibility even when having a difficult time

Working together means a lot of flexibility, which I’ve found to be particularly helpful when raising a family. As a child, I remember that my parents worked a lot, but because they were doing it as a team, they were good at balancing work with family time. That’s one of the reasons I went into all of this knowing it would be a really positive opportunity.

Although it can be hard to appreciate the flexibility when responding to hundreds of customer service enquiries on Christmas Eve, it is definitely worth it. Our situation makes the to-ing and fro-ing of parenting very easy. If your child is sick, it means you don’t have to worry about telling the boss what’s happening. It’s easier to arrange if one of you has to be off. And when you’re actually working together in the office, it’s easier to say, well, who’s cooking dinner tonight, and who’s picking up from childcare, etc.? You don’t have to sneak to send a text message.

Be generous with one another

I think it also helps us to be more generous with one another. We both realize that we have so much to get done, so we don’t tend to stress out when someone says, no, I can’t come to the swimming pool or whatever because I’ve got to do something.

I hope that’s been useful! And I’d love to hear your own experiences. Take care.